On my last full day in Lisbon, I agonised over whether or not to take a day trip to Sintra. I initially intended to go, but my friend went the previous day and said it was insanely crowded. The older I get, the less tolerant I am of crowds. After breakfast, I made the spontaneous decision to go to Sintra and I am so happy I did! I happened to be on the same train (40 minutes to Sintra) as Luis, a guy I met on my walking tour two days before. We decided to spend the day together and I can’t imagine it any other way. We had a blast!

We decided to hire a private driver for the day because we were both feeling lazy and a bit overwhelmed. We randomly chose Tania (Off Course Tours / reviews here) and had no idea how lucky we were to choose her! She kept us laughing all day – if you are planning to go to Sintra and you have a good sense of humour, please hire Tania! She is fabulous. We got to skip all of the queues and saved an incredible amount of time. Every time we did this, Tania asked us to wave like royalty so the three of us would do so, and this became the theme of the day (see below). Another reason to hire Tania: the palaces and monuments of Sintra are very spread out – if you are only in Sintra for a day, it will be quite stressful to try to see more than one monument on your own. 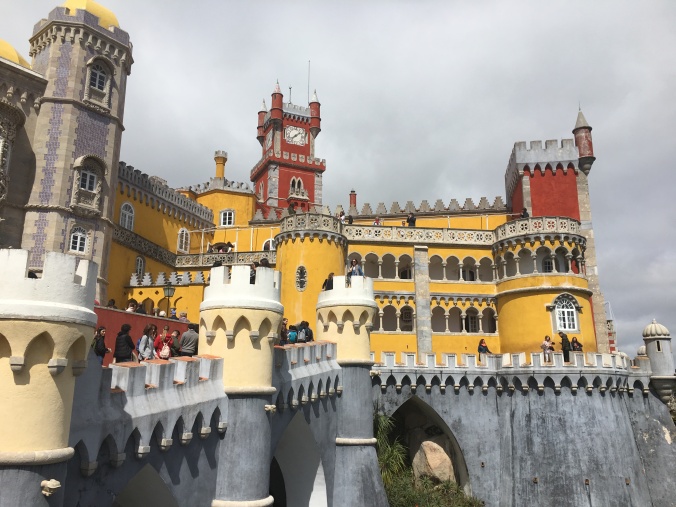 This guy matches the palace perfectly!!

View of the Moorish Castle

Being at Pena Palace felt like being in Disney World for adults! Quite spectacular and so much to explore. I was very pleased with the amount of people in Sintra – not too crowded at all. I cannot imagine being there in summer!

The grounds below the Pena Palace 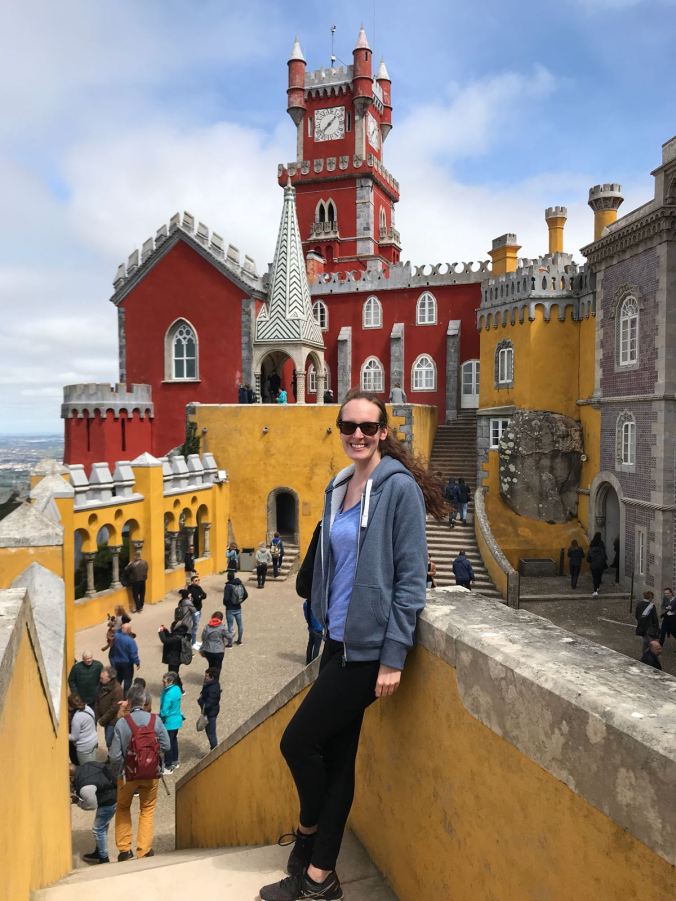 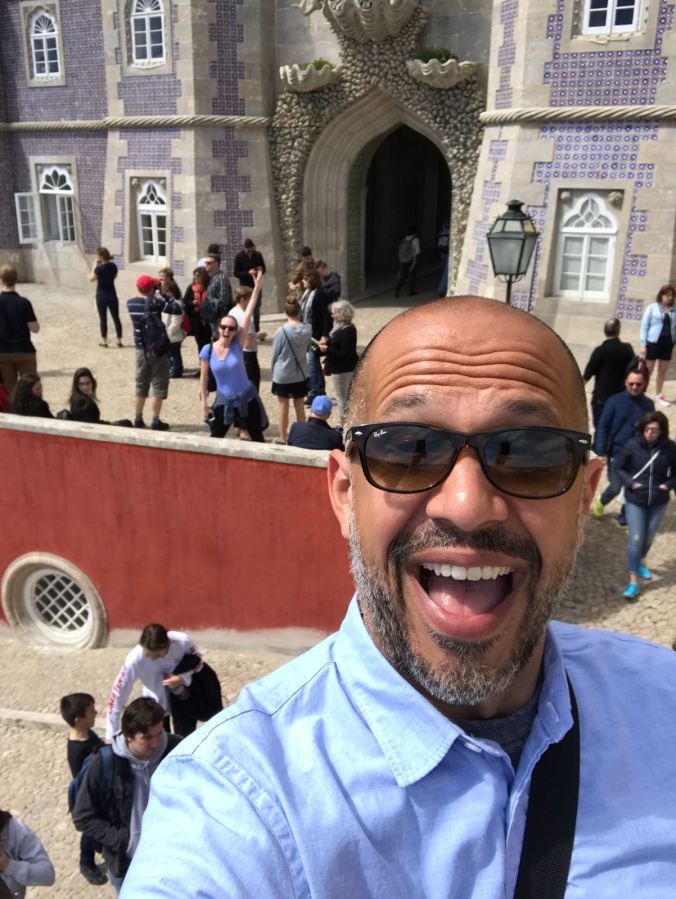 Sintra has a microclimate and we experienced almost every season in one day! The weather is rarely the same as it is in Lisbon. It was extremely windy, quite chilly, very hot and humid, raining (luckily this didn’t last long at all!), super sunny, very cloudy. It changed every couple minutes, literally.

Chalet of the Countess of Edla… looks like the Hansel and Gretel house! 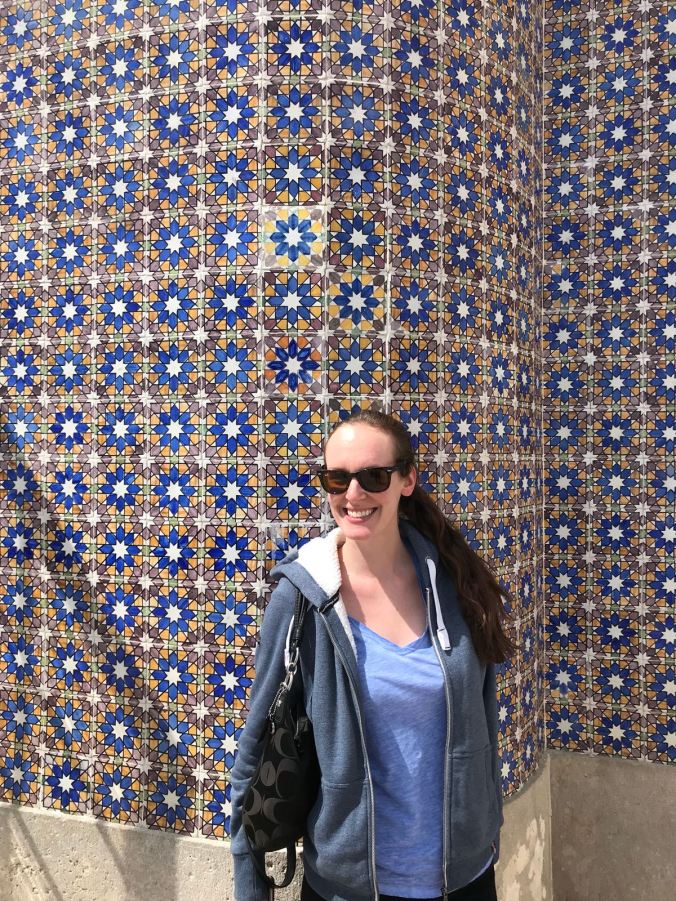 After lunch with a view (at a lovely local cafe called Garagem – we had gorgeous soup, a codfish croquette, a steak sandwich and a coffee… all for €6.50!!!), we went to Quinta de Regaleira. Every time I spoke to someone who had already been to Sintra, this was the place that they most recommended seeing and I can see why! So, so beautiful. We definitely had a major “wow” moment when Tania drove us up to the entrance and we had our first view of this beauty!

“The pair of wells, known as the ‘Initiation Wells’ or ‘Inverted Towers’, consist of ‘winding stair’ architecture, which carries symbolic meaning including the death/rebirth allegory common to many hermetic traditions. One of the wells contains nine platforms, which are said to be “reminiscent of the Divine Comedy by Dante and the nine circles of Hell, the nine sections of Purgatory and the nine skies which constitute Paradise.”” source 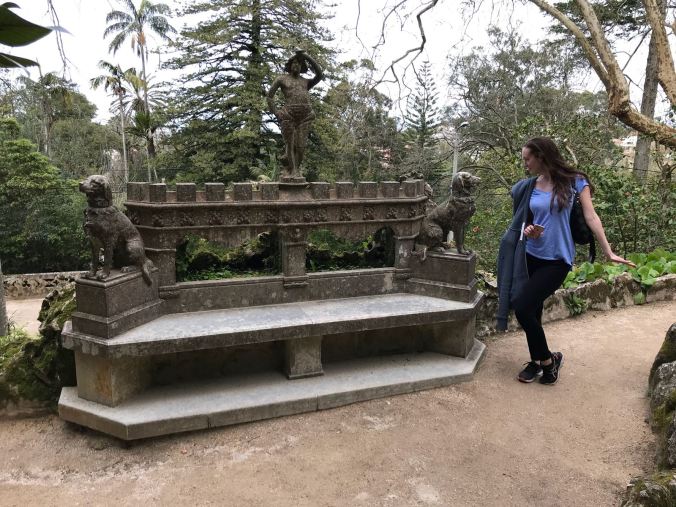 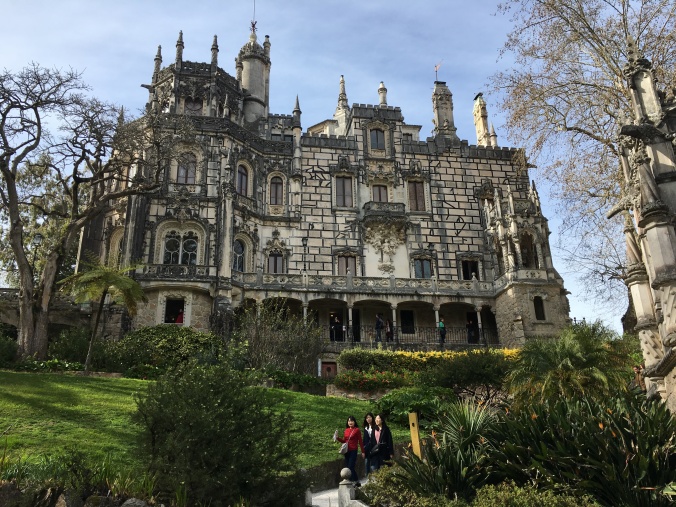 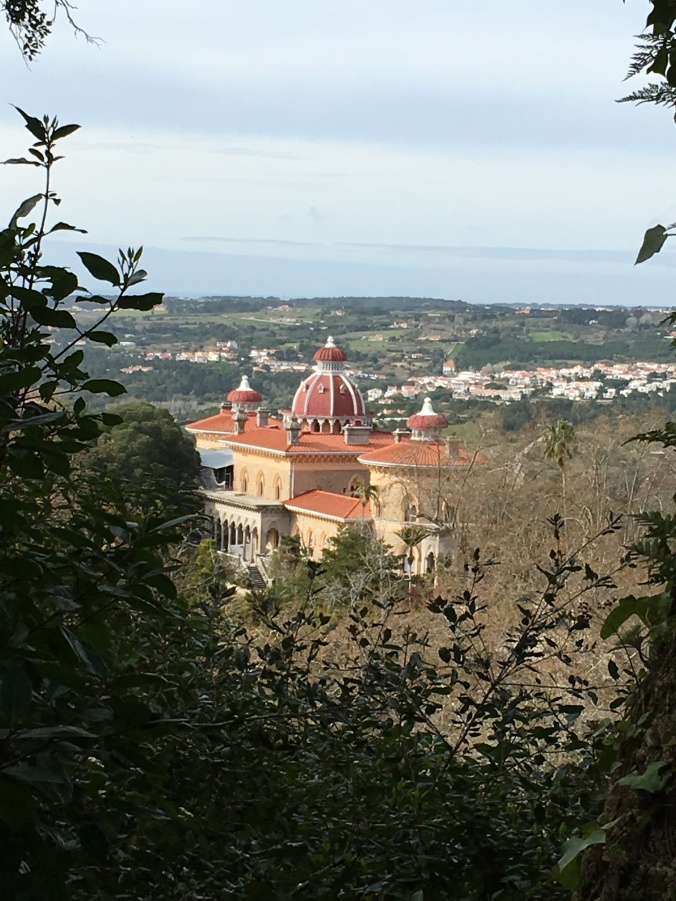 We were unfortunately too tired to hike down to the Monserrate Palace. This is at the top of my list the next time I am in Portugal!

This truly was the highlight of my day in Sintra. After we left Quinta da Regaleira, Tania drove us to a viewpoint of Monserrate and then, on our way to the town centre of Sintra, she said “would you like to try the best shrimp cake you’ll ever have?” It didn’t sound particularly appetising to me at the time, but I never say no to trying new food! We pulled up to this very unassuming old shop on the side of the road. Cafe Pereira or Cafe Salvador, as it is owned and operated by a sweet man named Salvador (pictured above, with Tania, our guide).

These photos were taken from Google Maps

To clarify, this “shrimp cake” is a savoury food, not a sweet cake. I don’t know how to describe it as it was unlike anything I’ve ever had before, but it was absolutely delicious!! Salvador also makes incredible espresso (and I’m a coffee connoisseur!). He was so pleased we decided to visit him, but really, he has no idea how happy he made me. Tania said he doesn’t get as much business as he used to, partially due to the location outside of town. This made me so sad because really, businesses like Salvador’s are who we should be supporting. Please, if you have a car in Sintra or if you hire Tania, visit Salvador’s shop and try his shrimp cake, or at least his coffee!!!

The laneways of the town of Sintra were reminiscent of being in Greece! 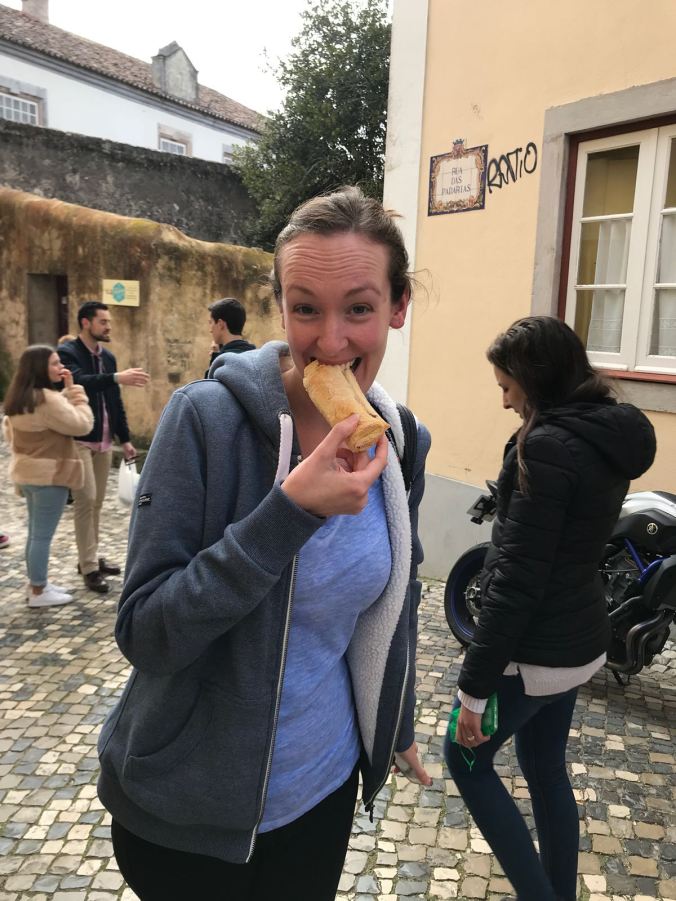 Another must do when in Sintra: go to a place called Periquita and try the travesseiro pastry! Travesseiro means pillow, but that doesn’t give much away in regards to its taste. It is made of puff pastry with a filling of almond cream, but the taste really cannot be described! Please note: Piriquita currently has two units, one right of the main entrance of the alley of Sintra and the other on the same street but higher up – just keep going (it’s very close). 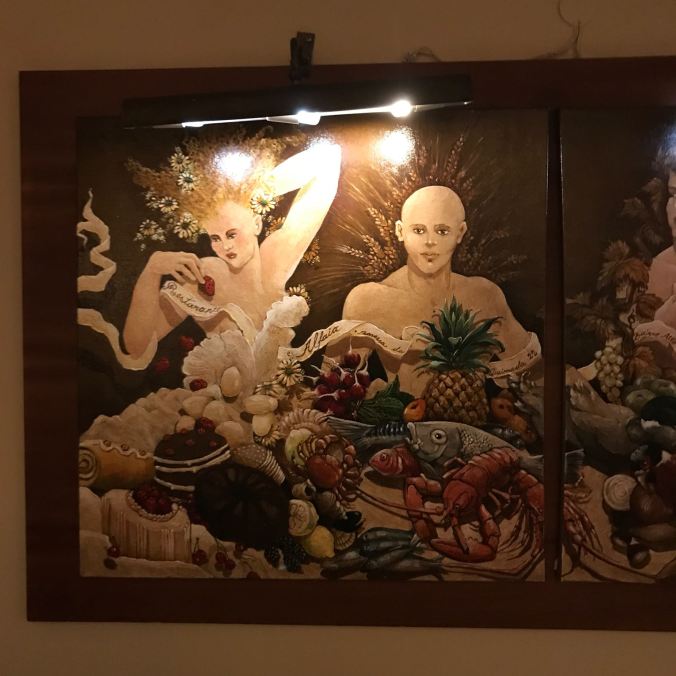 Luis and I went out to dinner together in Lisbon after our day in Sintra at Alfaia and we noticed this piece of artwork hanging in the restaurant. He said he was the bald guy and I was the lady with the crazy hair – perfectly accurate. I could not stop laughing. 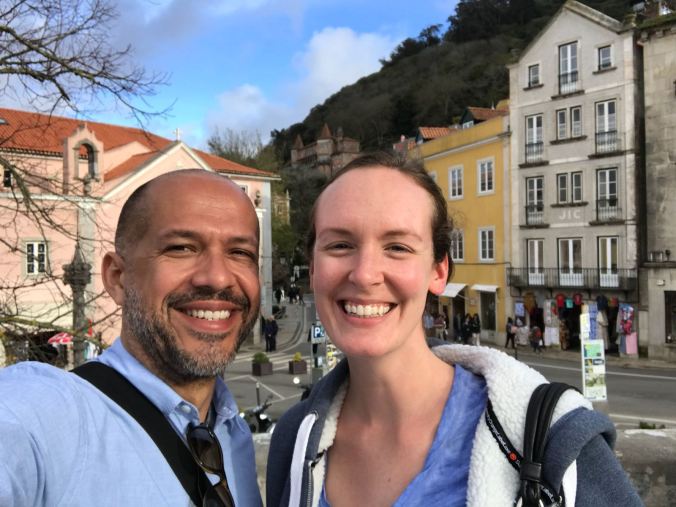 If you’re visiting during off season or shoulder season, I would strongly recommend visiting Sintra. Please make sure you bring layers and be prepared for all types of weather – don’t let the weather in Lisbon fool you! I would also highly recommend more than one day in Sintra to really do it justice as it is quite mountainous and the monuments are spread out. Don’t skip the town of Sintra itself as it really exceeded my expectations. It is beautiful and quaint and really enjoyable to wander around.